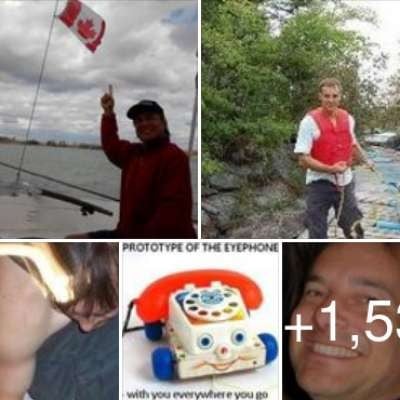 I began exposing Canada's movement towards tyranny back in 2002 with my banned http://911cd2005.unaux.com/ I produced thousands of these and handed them out on CDs across Western Canada. In 2006, the NWO minions(Freemasons mostly) identified what I was doing to secretly awaken the non-Cult people of Canada to the political corruption. I had little understanding that the people trying to murder me were Freemasons hiding as Homeland-Security employees. After 16 years of surviving poisonings, arranged accidents or hit-jobs I have discovered the Mystery School Cult is much what William Cooper described them in his "Mystery Babylon Series"... you should listen to all 42 episodes from 1993... still valid today. I didn't believe in UFOs, but I believe Cooper saw one like he described from his submarine watch duties(it was likely arranged to use them).
What the Luciferians want to hide is their brainchip-hivemind that turns all the secret societies into one brainchipped-army of thUgs... murderous, deceptive, well-organized thUgs.

My Brainchipzombies.unaux.com was banned by Freemasonry on thus I provide a link to download and open index.html: https://mega.nz/file/6GwwnZLL#Z1gC2a1AENp5uk8CAB2xJ3JcWkZNr6zAS9dWuYoBwc4

index.html of my attempt to educate freemasons what has gone wrong with their lives: https://mega.nz/file/mTRyHLRJ#13fVXIexLl0MB7SV4VI9yGUqQr5f04v5uR_ZZTlNQno

Iron Mountain Report is real and done because the ancient-masters are afraid of self-annihilation again. Old Atlantis was likely destroyed by a thunderbolt from Mars possibly in 747 BC or earlier. You can see the Carolina Basins are from a passing thunderbolt since they are all oval and pointing to an apex. The thunderbolts.info site will educate you about thunderbolts with their "Mars the scarred Planet" video. The Freemasons run the fake education-systems for the broad-masses... to dumb them down with non-sense.
https://ugetube.com/watch/iron-mountain-report-commentary-which-is-the-cult-039-s-world-wide-secret-societies-tyranny_n6zaDZgKiXxhFCC.html

http://antissss.ezyro.com/ is my initial Anti Secret Society Movement
Here is a link to download the entire site: https://mega.nz/file/yPgCRLSK#I1EN77jwxX2XiRzTM8UD891xqxHsRAIoccKccKJr80M

My site about the rebuilt Tower-Of-Babel is more general about the NWO so the NWO has left it up and not banned http://tob.ezyro.com/ https://mega.nz/file/vbxlRB6I#bprBRZyQPpSUKGjuJ7pVzTTUnSXNwVy9iEkMkj4LS2o

My site to develop your "inner senses" was banned because the Cult does not want humanity to spiritually expand their individual minds innersense.ezyro.com https://mega.nz/file/WSZDSThS#R0OKrSyH32lSYB2IFZrlEgFG64N4FvAvThwj5X8zbuY

What is physical reality all about if we have all these murderous thugs running around genocideing everyone not sworn to the satan-race. If their is a satan, then why doesn't the Creator-God destroy the bad guys? In short, our Creator-God want you to grow your soul-fragment into a fully cognizant Soul and has provided you with the Sethbooks to aid you. The appalling spiritual situation upon Earth is due to the ancient, failed mankind who are sore-losers. They ruled the Proto-saturnic solar-system https://ugetube.com/watch/dr-wal-thornhill-thunderbolt-info-holoscience-com_vvgHjWkVMlXIRxX.html for millions of years and used A.i. to change their genetics to live for extremely long lives. Seth called them the "Lumanians"

Those Remnant-Lumanians hate Nature and Homo sapiens as "the chosen species" for mankind upon Earth. Homo capensis created the Mystery School Cult to help them destroy all Homo sapiens. Eventually the satan-race will destroy all of nature upon Earth if they can... they already have humanity poisoning the Earth with GMOs and herbicides and insecticides. They laugh at how stupid most Homo sapiens are, but we are a young and naive species while they are a very ancient and resentful species that have twisted the blueprint of mankind out of their genetics. They pretend to have evil-powers, but they are a dying species of tricksters... even if they redevelop an A.i. fake-God again, they will self-annihilate as the failed species of mankind if they can extinct the chosen mankind, Homo sapiens.
The minions of the Cult(Freemasons are #1 sheepdogs) are brainwashed to believe that they can be uploaded into an A.i. algorithm https://ugetube.com/watch/behold-the-nwo-fake-mind-upload-into-a-i-religion-the-hand-goes-into-the-golden-triangle-inside-asta_lE8D7ojc1vTTlms.html or "soul equation" https://ugetube.com/watch/the-soul-equation-mainstream-religion-and-mystical-nonsense-mp4_4F6X3v7nHIUtSgz.html
But the Sethbooks teach that the spiritual-soul cannot be uploaded into any physical computer because there is nothing spiritual inside a man-made electronic device... such devices are locked into the space-time illusion whereas the soul is non-physical and timeless. Physical reality is a training-grounds where a personality can develop by lovingly-growing or murderously-decaying. God provides a medium for the practice of free-will to show one's chosen true-colors, so to speak.
The training ground will also double as a filtering of personalities and egos... the failed soul-fragments will not escape the mid-planes after physical death from old-age. Suicide is considered a cop-out and severely shrinks one's multiverse of probable-worlds (You learn this from studying the Sethbooks from All-That-Is). I have found that Cult minions like to quote Seth, but instead of learning the truth, they twist Seth's teaching to conform to their Mystery School Cult beliefs and dogmas... Seth calls these "their distortions." Their fake "Law of One" is full of distortions, just like JCKnight's "Ramtha" facade.
Even the Christian Holy Bible was made to conform to the Latin, Vatican dictates, thus twisting the original teachings of Jesus. The Sethbooks try to set mankind on a less appalling path towards becoming a successful civilization... the Freemasons are the "Death Cult" because their ending is the death of Homo sapiens challenge to succeed... there will never be a mind-upload into A.i. and "Ad Astra: a thousand points of (fake)Light" is just a devils' hoax to encourage servitude by the minions to serve the devils of trickery.
https://ugetube.com/watch/karen-hudes-world-bank-insider-reveals-who-grave-s-behind-the-vatican_BVeHpSKJJOofXfr.html
Karen Hudes is one of the rare Judas Goats that exposes the Homo capensis(Remnant-Lumanians) in order to gain a following of sheep. Brien Foerster also exposes the ancient skulls of Homo capensis with their interbreeding attempts after the last Velikovsky cataclysm of 747 BC. https://ugetube.com/watch/enlongated-cone-head-of-paracas-peru-lost-human-history-revealed-mp4_ckyBR8Xr9bR3zwK.html
https://ugetube.com/watch/elongated-skulls-dna-results-march-2019-paracas-peru-museum-by-brien-foerster_WMiLZ5LScCmLBxB.html
The Cult minions study the movements and alignments of the planets because it used to cause thunderbolts: https://ugetube.com/watch/mars-earth-shock-747-b-c-thunderbolt-the-death-of-a-i-outworn-technoloty_OC3cTUZrOeWe4UD.html

My video channel exposes decades of critical-thinking and deciphering the Freemasonic deception upon the sheeple.
Mode